Psilocybe Cyanescens is a hallucinogenic fungus of the Strophariaceaes family . The components inducing its psychoactive effects are psilocybin and psilocybin 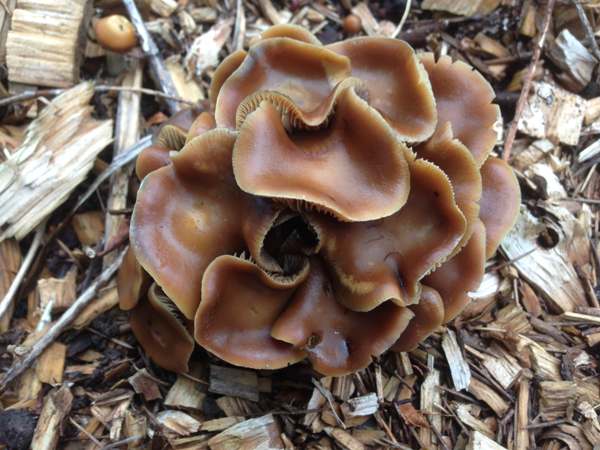 Psilocybe Cyanescens commonly known in UK as the Blue leg Brownie and in USA as Wavy Caps, is usually found growing on rotting wood chip mulch.

Odour: Like the smell of freshly cut green beans and of flour.
Cap: 1.5–6 cm in diameter, starting out rounded and closed around the stem. When opening first convex with a distinct central bump (an umbo) that remains as the cap opens out and the cap margin becomes wavy. That waviness is the hallmark for this species. The colour is orange-brown at first, but when drying out it becomes tan-brown or ochre-brown. It readily bruises a greenish blue at the margin and centre of the cap. The whole cap can become a dark blue-brown with age. The gills show through as lines on the outer part of the cap. Shiny and slimy (viscid) when wet. The margin is thick and hangs over the gills.
Gills: Moderately crowded, broadly attached to the stem or notched. Starting out pale tan, they soon develop dark spots and in the end turn completely dark purple brown. Readily turning blue when touched and damaged.
Stems: 4–9 cm long x 0.25–0.8 cm wide, cylindrical or slightly wider at top than in the middle, covered by silvery fibres. The stem turns blue-green when touched and damaged.
Ring or veil: Threads from the veil are visible on the cap margin and the stem when the cap is opening up.
Cup: None.
Spores: 10–14 x 5.5–7 µm, smooth, with a germ pore.
Habitat: In troops and flushes, often on wood chips, on woody debris, rarely in lawns, common especially in urban environments. Saprotrophic
Geographical range: In BC, mainly in the Vancouver area. In coastal western North America from southern BC to southern California, rarely reported from eastern parts of the USA, widespread in Europe.

Do Not Confuse With:

Small brown mushroom are difficult to identify and some are highly toxic. Spore prints help to distinguish Psilocybe species from small, brown mushrooms that contain deadly toxins. If the spores are dark purplish brown, the mushroom may be a Psilocybe. If the spore print is rusty brown or cinnamon brown, the mushroom is not a Psilocybe and may be a Galerina or Conocybe species that contains potent, liver-destroying amatoxins. The deadly toxic Galerina marginata can also grow on wood chips, like Ps. cyanescens. The stem of Galerina marginata turns black(ish) with age, but never blue. It also has a much more distinct fibrous ring on the stem than Ps. cyanescens. The cap of G. marginata does not usually become wavy as it expands. Be in particular aware of the colour difference: blue stem in Ps. cyanescens, black stem in Galerina marginata. Don’t talk yourself into believing that black is blue! Taxonomic history and synonym information on these pages is drawn from many sources but in particular from the British Mycological Society’s GB Checklist of Fungi and (for basidiomycetes) on Kew’s Checklist of the British & Irish Basidiomycota.

Be the first to review “Psilocybe Cyanescens” Cancel reply