Psilocybe caerulescens are also known as Landslide Mushrooms and are known for containing high levels of both psilocybin and psilocybin compounds. This specific strain of magic mushrooms are one of the many mushrooms native to Mexico and South America that were most commonly used by Aztecs and Mazatec cultures for their perception, mood and consciousness altering abilities. Psilocybe caerulescens are recognised as one of the more rare strains of mushrooms found globally. A well-rounded mushroom with easy-going effects, it can be considered an entry-level strain for those looking to delve into the world of psychedelics. Ancient Aztec civilisations revered the Psilocybe for its’ ability to unlock the mind and high potential for spiritual development., often using it as a means to achieve transcendence. The psychedelic experience associated with this particular strain is considered moderate to potent, with many noting a trip that averages around 3-5 hours, while still exhibiting a full spectrum experience full of sensory hallucinations and mindful awakening.

The taste and smell of Psilocybe are strongly farinaceous, reminiscent of cucumber, though the smell lessens with age or when dry. 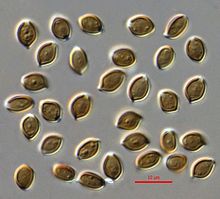 The cap is (1)3–7(10) cm broad. Convex to obtusely campanulate with an incurved margin at first, rarely becoming plane, and often are umbonate or with a slight depression in the centre. It is viscid when moist from a separable gelatinous pellicle. The margin is slightly translucent-striate when moist. The cap is hygrophanous, yellowish brown to reddish brown with a silvery-blue metallic lustre paler at the margin, and drying to a beige or straw yellow. It readily bruises blue when handled, the younger specimens bruising bluish olivaceous or even blackish. The cap often has a great variation in colour and form.

Caerulescens is found growing gregariously or cespitosely, rarely solitarily, from June through October on disturbed ground often devoid of herbaceous plants. It often grows in sunny locations, preferring muddy orangish brown soils with much woody debris. Psilocybe was first reported from near Montgomery, Alabama, by Murrile in 1923 on sugarcane mulch, not re-documented from that locality since. It was recently found in South Carolina in September 2008. Psilocybe is common and widespread throughout northern Georgia. Found in N. Georgia in 2000.

Be the first to review “Psilocybe caerulescens” Cancel reply